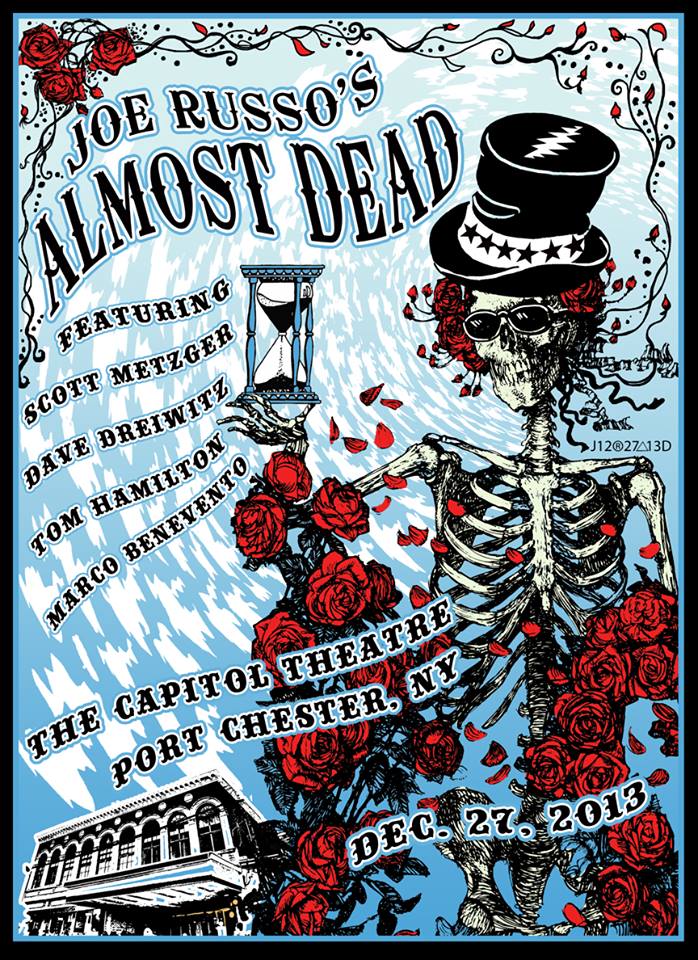 Reviewer: mifraidin - favoritefavoritefavoritefavoritefavorite - July 16, 2016
Subject: Crazy good
"Breath of fresh air" is right on. New energy, new creativity, new directions. The best tribute of all to the Dead is that JRAD takes these songs to wonderful new places. Just discovered these guys (thanks, SomeDarkHollow) and can't get enough.

Reviewer: joeyjoejo - favoritefavoritefavoritefavoritefavorite - January 14, 2014
Subject: Feeling Young Again
BOOM is right!!! JRAD is awesome. The first thing you can tell about this band is that "they love each other." They are tight, adventurous, fast and inspired. They played GD music at the sacred Capital Theater (a bold move ;) and rocked it like very few have before. The mood at this show was off the charts, EVERYONE was smiling, laughing and dancing their asses off. I give this show 5+ stars. Download this show ASAP and do not miss the next chance to see this band.- period.

Not enough credit is given in valuing the Grateful Dead to how great their songs are, surely the most comprehensive, in-depth, across-the-board range of any band anywhere, so one could hardly go wrong playing nothing but Dead songs. It may be heresy, but (at least on first listen) these guys might be even better musicians in terms of tightness, being in tune, and energy. I am only part way through my first listen as I write this, but that "Easy Wind (one of my favorites)>Shakedown Street" jam is off the charts. I very seldom give 5 stars because nobody is perfect, but I cannot see any reason not to do so now. Keep on Truckin'!
Reviewer: Pastor Tim - favoritefavoritefavoritefavoritefavorite - December 31, 2013
Subject: NOT another "Dead cover band"
Lord knows we've heard enough covers of Grateful Dead songs -- some brilliant, some insipid -- bit the moniker of "Dead cover band" does NOT fit here. On the advice of my buddy Mark Burnell (who was at this show), I opened the stream and was pleasantly surprised when JRAD went DEEP into the catalog for a rousing Cream Puff War that had all the bluesy feel of an early Pigpen version. That's respect. The entire show is rock solid and the recording is exceptional (might have liked a little more AUD in the mix) and it builds to a climax with an exquisite 28 minutes of Terrapin, as subtle and mindful as any we heard back in the day. These are musicians who obviously have a great deal of respect for their material, the roots from which its drawn, and the gravitas of playing it again for people still hungry to go back home again. HOW strongly do I feel about this show and this particular recording? I'd HIGHLY recommend it to anyone who said, "Nah, I've never really gotten into the Dead." Yes, it's THAT good. FIVE STARS on both performance and recording.
+ PT
Reviewer: Cliff01 - favoritefavoritefavoritefavoritefavorite - December 31, 2013
Subject: Cover Band?
"Joe Russo and Friends" tribute to the songbook of the Grateful Dead is unique in that, from my perspective, they are a group that doesn't come across as a "tribute" to the band. (My guess is they are not fond of the word at all.) Their performance didn't come across as 2 sets of covers. They sound like a group of really good musicians who (through Russo's experience with Phil and Bobby) have stumbled on the magic of the Dead and play the music…improvisationally.. in their own way with their own style and bring their own energy.…kind of an antitheses to a DSO show. Metzger's guitar style and sound is one of the most unique I have heard and when he plays Jerry's leads, they are amazing without being a carbon of the Fat Man's sound in any way. I expect we will see more of this type of "tribute" from young musicians in the years to come and hopefully more from JRAD. Great time at the show and thanks for sharing on the archive.